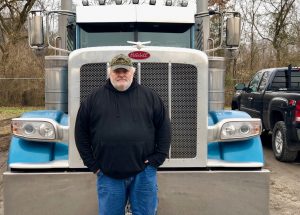 If you’ve been with Lewis Transport for any length of time, you’ve probably met or talked to Tim Maynard. Tim has been with us working out of the Louisville office for 26 years and is one of the contributors to Lewis’s success. He’s an all-around great guy and true asset to the company.

When Tim joined the team, he didn’t have his Class A CDL but always knew he wanted to be a trucker, having watched the big rigs drive by his house when he was a kid. Tim and Lewis struck a deal to provide him with the training and equipment he needed to pass the CDL test. Tim is extremely thankful for Lewis giving him a shot, especially to George Tabler, Greg Gassaway, and Pam Scott. Whether hauling that extra load or helping out with dispatching, Tim has “paid us back” many times over the years.

Tim is dedicated to safety. When asking Tim some good advice for a new driver, he said, “Pay attention to what you are doing, write everything down, and keep your phone in the truck while loading and unloading.” The best part of the job Tim says is the trust Lewis Transport has in him. “No one is looking over my shoulder- they trust me which is great.”

Tim is a hometown boy, graduating from Valley High School. When he’s not hauling loads and slinging hoses, Tim enjoys time with his wife Tammy and tries to go four-wheeling with his sons Corey and Zachary as much as possible.

He is one of the best Lewis Transport has and a great choice for the first Driver All-Star. If you need any help, advice, or someone to sit down and get a breakfast at Cracker Barrel with, Tim is your guy.